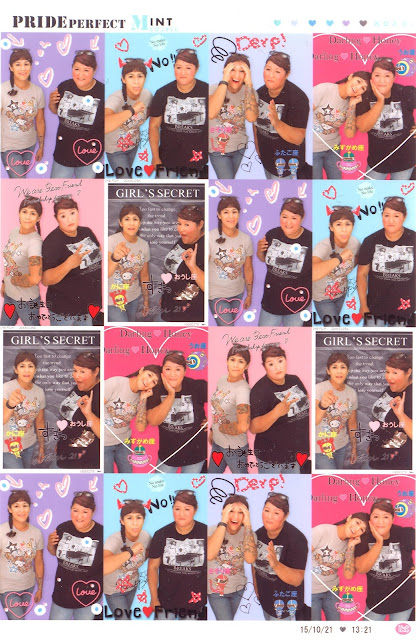 Purikura: A photo booth is a vending machine or modern kiosk that contains an automated, usually coin-operated, camera and film processor. Today, the vast majority of photo booths are digital. (Wikipedia)
Warning:  Lots of pictures for this post...
One of the fun activities my sister and I wanted to try while visiting South Korea and Japan was Purikura.  The photo booths we are accustomed to are rather boring.  You get 4 pictures in either color or black and white that your heads barely fit in.  You don't have the option to modify or edit your pictures either which is rather boring.  So we jumped at the opportunity to act like total goofballs and have it documented for the world to see it now.

Our first try was pictured above and done while we were in South Korea.  We didn't know what we were doing.  And when it came to editing, it was all in Korean so we had to sort of guess what we were doing when trying to add designs to our pictures.  My language comprehension is rather slow and very limited so it would have been a fool's errand trying to read the editing menu.  We ended up running out of time and we still ended up with an awesome picture.

Our subsequent pictures were much better, they were all taken in Japan.  Backstory:  Back when my sis and I visited Alaska we met a girl from Japan.  We exchanged contact info and when we made our plans to visit Japan we got in touch with her and she agreed to meet up with us.  We spent a very short time with her but we managed to pack in several fun things.  She also helped us with Purikura in Japan.  After her coaching, you can tell by the pictures below my sister and I went a little Purikura crazy. 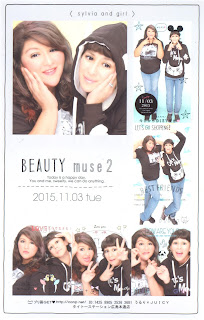 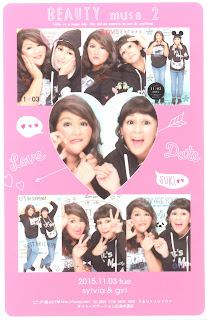 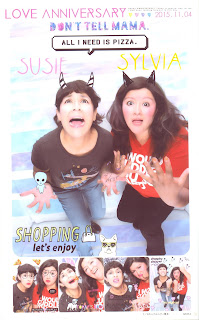 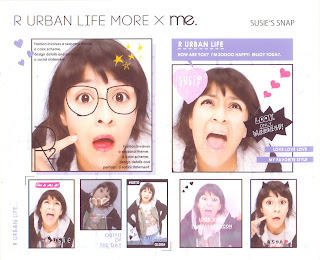 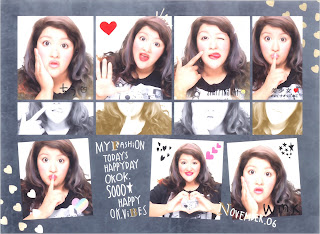 Despite what many people think, I did not wear make-up during my overseas trip.  The make-up effect was all courtesy of the Purikura machine.  The freakish big eyes and flawless skin were also courtesy of the Purikura machine.  All in all, I found it to be entertaining, economical and a great keepsake.  Why do we not have one of these where I live?  I should get one, I would make a killing since these pictures are way cooler than the typical photo booth pictures available here.  And for under 5 bucks and up to 3 copies of the pictures, I don't understand why this isn't a huge hit here.
Posted by Unknown at 1:14 PM