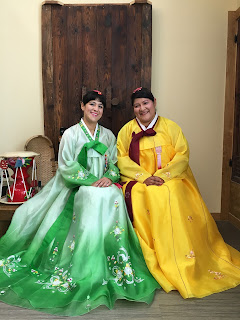 Hanbok (South Korea) or Joseon-ot (North Korea) is the traditional Korean dress. It is often characterized by vibrant colors and simple lines without pockets. Although the term literally means "Korean clothing", hanbok today often refers specifically to clothing of the Joseon period and is worn as semi-formal or formal wear during traditional festivals and celebrations. - From Wikipedia 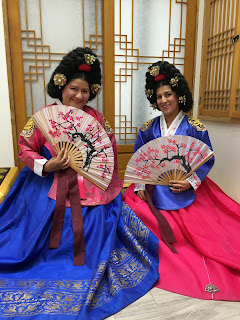 One of the things I thought would be fun to do while in Korea was to try wearing Hanbok.  I am not into dresses too much but after watching this video, it looked like it would be a fun new experience.  Plus my mom is a collector of photos taken of her family.  So we thought it would be a great gift to give her some professional photos of us while we were in Korea. 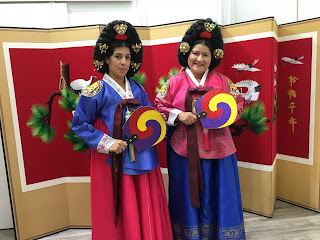 Our original idea was to visit the same studio as the girls in the YouTube video.  But in my planning, which started MONTHS before we left, I didn't verify a few things.  When I researched the studio it was open and located in Insadong.  We had planned on doing some exploring at Insadong our first day.  Well when we arrived, the studio in Insadong was closed for renovations!  Damn! 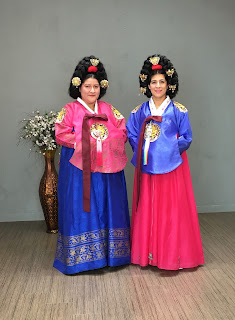 We still had yet to receive our Pocket WiFi so we had to rely on the public WiFi, which is a bit spotty but really fast when you are connected.  I had never used public, city provided, WiFi.  It was actually really cool.  I was happy I didn't have to wander into a coffee shop to mooch their wifi.  So, on their site, which had been updated from the last time I looked at it, they mentioned renovation dates.  And their site also mentioned a location in Myeongdong. 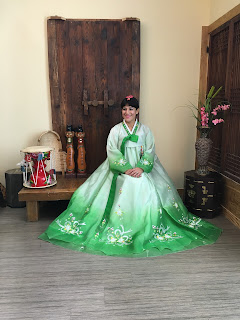 We decided to trot over to Myeongdong, which was probably farther than it felt, to find the other location.  Since it was our first day in Korea, we had a little bit of a tough time finding the place(translated=exhaustion).  So after circling the same area for a while we spotted a hanbok photo studio that we guessed was the right place. 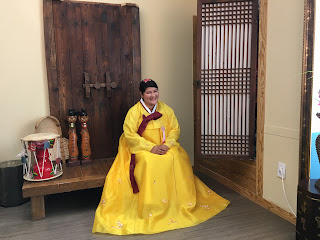 Turns out it was the wrong place(I don't recall the name of the place).  But they promptly explained their services and we chose to take our pictures there.  I am really glad that we did too!  The women doing our make-up, hair and dressing us were really nice and funny too.  Though we had limited Korean speaking skills and their English was also limited we managed to converse and have a fun time.  After my aunt passed (2 days prior) and a long ass flight, it felt great to have so much fun and laughter. 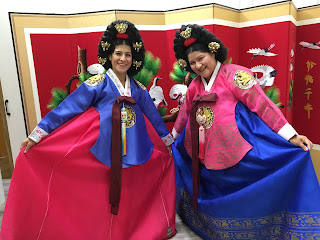 As for the services, my sis and I did a package deal that allowed us to select 2 different style hanbok styles, make-up application and our hair styled.  We then had our professional photo shoot, we were allowed to take our own photos too!  After they were done posing us for our photos we were taken into a room where we were allowed to have our own selfie photo shoot.  There were props and the gal that led us to that room was also kind enough to take pictures of us using our phones. 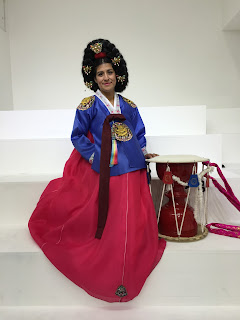 Once we finished our photo session we got changed into our normal clothing and then had to select our pictures.  We each got to select two 8x10 photos that were mounted in a fancy display portfolio.  Not like those icky Sears paper frames; a real pleather bound portfolio that actually is nice enough to have displayed out in the living room.  I'm not going to lie but I think we looked damn good!  I think for what we paid it was well worth it.  It might seem a little steep to some but for roughly 150 USD I think for the experience we had with the staff and learning about their culture, in addition to the photo shoot it was well worth it. 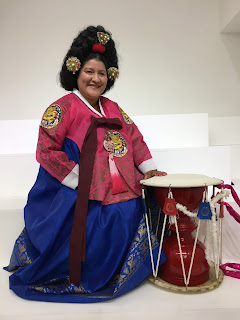 And as for wearing dresses, well my attitude has changed.  Hanbok is hands down the most comfortable dress I have or probably will ever wear.  It doesn't bind, restrict or chafe!  However, it could use some pockets or something to stash my stuff since I am not a purse carrying lady.  I would recommend this activity to anyone that has the opportunity to try this traditional clothing.
Posted by Unknown at 9:02 AM