Did I ever tell the story of when I was strangled?

No, not to death.  Obviously!

No, it wasn't some sex thing.

Once upon a time I was at a rave (okay often I went to raves).  For the most part I will have to attest that sometimes things don't go too well or all too often end up forgotten due to a drug induced haze.  Oh but I remember, I remember it was Nocturnal Wonderland in Downtown LA.  (Lineup if you are interested in that sort of thing.) As you can guess by the title it was Wonderland themed/inspired, it had been a few years since I had attended Nocturnal Wonderland and this time I thought I would go as Alice. 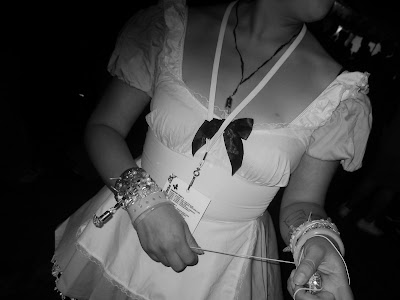 How many variations of Alice were there?  Probably several hundred, several hundred different Mad Hatters, Queen of Hearts, White Rabbits, oh you name it!  Among those dressed in theme were the typical  kandi kids with rave names like Simba, Skittles or Rainbow not dressed in theme.  Sometimes at the end of a rave these kandi kids can appear to have morphed from dancing happy people to half-comatose zombies.  Why you ask?

Drugs.  Yes, you heard me, drugs.  No, you don't look like that from dancing for 12 hours.  You look like that from dancing for 12 hours ON DRUGS.  Sometimes these drugs cause people to lose what is something very important to me, personal space.  These magical happy drugs make people want to hug and hold hands and bop around like synchronized epileptics, seizing to the same rhythm. 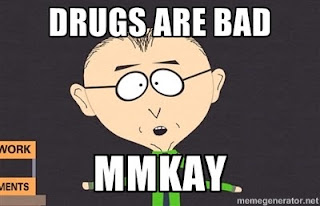 Sometimes kandi kids get lucky enough to be dragged away by security.  Sometimes kandi kids who mindlessly strangle girls don't notice girls holding a garrote.  Go on, scroll up, look at the black and white picture again.  Breaking free from kandi kid was easy enough but holding back the anger was not so simple.  Sometimes kandi kids get lucky and get dragged away.  Now, now, I know people will say it's not fair to lash back at someone who didn't know what they were doing.  In all seriousness, I have heard 'temporary insanity' too often to know kandi kid would have gone to jail.  Yeah protecting myself was necessary and maybe strangling him back would have appeased my, "An eye for an eye," mentality.  But luckily security was there to keep me from going to jail too.

Now, you are probably wondering what the point is of my story.  The point is, strange shit can happen.  Dangerous shit can happen around a huge amount of people not to mention most of them on drugs.  Which is why I am wondering WHAT THE FUCK are some people thinking? 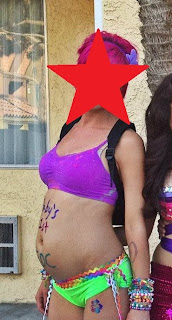 Pregnant at a rave???  Now, here is assuming the doting mother to be abstained from illicit substances.  Good for her if she abstained.  But how can you control other people's actions?  Being almost strangled is almost the least of my worries.  Trampling is common at raves, the rave the above mom to be attended was Electric Daisy Carnival.  I have been to my fair share of EDC's and know overdosing, trampling, falling and shoving can be a problem.  Granted the gal pictured above did not suffer ill consequence and the rave was most likely a great experience for her.  But sometimes bad things happen, sometimes people get really hurt and there have been reported cases of death.  Is a weekend of fun that much worth the safety of your unborn child?

I really can't judge the actions  of others.  I can't condemn an activity that I participated in avidly.  But I still wonder, what about the safety of the unborn?  I know full well when I make risky choices what my outcome may be.  An unborn has no knowledge of the choices being made around them, for them.  I am not surprised to see more than one internet picture of a pregnant party goer.  I am very surprised not to find any news stories of pregnant ravers getting hurt or losing their unborn child.  Is it only a matter of time or did I not dig around long enough?

Email ThisBlogThis!Share to TwitterShare to FacebookShare to Pinterest
Labels: fail, not my business, things you can't undo, why, worry