Today is Dom's birthday, he is 2 years old now. Saturday was his birthday party and here are some pictures and a few videos. I think he had a fun day, but then again when is it not fun if there are presents and cake. Right? 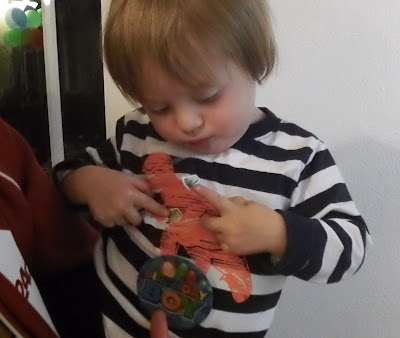 Clicky click to read on »
Posted by Unknown at 10:47 AM No comments:

Nervous doesn't even begin to cover how I feel. 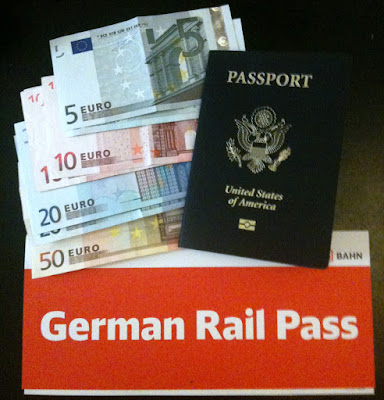 As you can see, I am ready to go. Got myself some Euros, my Passport and our rail pass. I have my travel bag, all I need to do is pack my clothes and junk.

I am a little freaked out right now. And really super excited. Not to mention I can hardly think straight or write correctly for that matter. My brain is refusing to absorb any more of the German language. Overload? Maybe.

Last night as my sister and I were fine tuning our itinerary, I misspelled 'buy' THREE TIMES! I kept skipping the 'U'. We had a good laugh over it, obviously our little brains were tired. So what do I have left to get for my trip? I think I need some socks, having fresh new socks is the best for when you travel. I am also thinking of getting a pair of Dickies, they are very sturdy, look dressier than jeans and have just as much comfort. Also if we get caught in a down pour, they dry much faster than jeans. I also need some new walking shoes. I better get these soon so I can break them in BEFORE I go. Once upon a time I broke in skate shoes on a skate trip, bloody and blistery feet is what I got.

Clicky click to read on »
Posted by Unknown at 8:30 AM No comments: 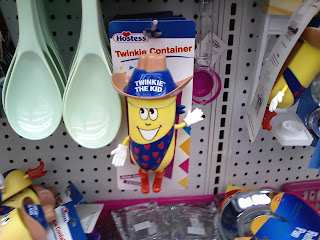 It's to keep your Twinkie from being smashed in your lunch box!

At least that is the conclusion I came to. I could be wrong. But I am willing to guess that I am right. I am guessing by the abundance of Twinkie Containers at the dollar store that no one really cares if their Twinkie is smashed or not. It still tastes the same right? I don't know because I probably haven't had a Twinkie since the 80's.

Trip to the aquarium.

Hello Susie! What did you do this fine Washington's Day with your paid day off? Well everybody, I spent the day with my friend Jenn and her lovely daughter Sadie. We went to the Monterey Bay Aquarium! It seems that so did a whole lot of people from all walks of life and from all over the world. I want to say thanks to Jenn for inviting me and to Jenn's dad for winning the tickets from 99.1 The Fox. I had not been to the aquarium since about 5th grade and had always wanted to go back but never really made the effort to go. I don't know why because the drive is not really that bad and not as far as I remember it being. (Probably had something to do with it being a school field trip, slow bus ride and several potty breaks.) I intend on going back later this year to check out their new Jellyfish Exhibit.


Check out a few of the videos I took of the Jellyfish while I was there:

Clicky click to read on »
Posted by Unknown at 2:22 PM No comments:

Don't get into a car with a drunk driver. 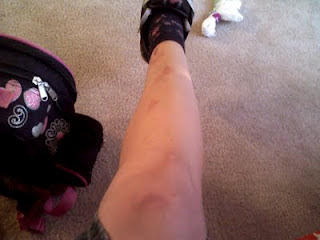 Especially if that drunk driver is a young male with something to prove. I think all that was proved was his stupidity as well as my own.

See the picture on the left, that's my right leg the morning after I almost died. The left leg pretty much matches the right leg and I had chafing from the seat belt on my neck and a headache from my head whacking the passenger window.

My friend, who likes to drive like a maniac even when he isn't drinking decided it was time to go home. I was tired and I wanted to go home too, so I asked him if he was okay to drive. Of course his answer was going to be yes because he didn't want to sleep in his uncomfortable truck 15 miles from home, he could have asked his friend if we could spend the night is what he should have done. I really should have asked to stay the night but I had no way of getting home the next day so I figured I would take my chances. He didn't seem to be that drunk, in reality he probably wasn't. But he decided to be a real genius and instead of driving us home he drove on a two-lane rural road in the opposite direction.

Clicky click to read on »
Posted by Unknown at 2:54 PM No comments: 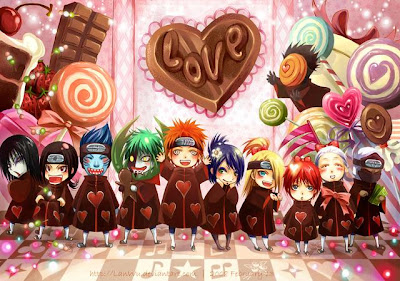 I was very excited to get to work today because my mister's Valentine's gift was being delivered to my office. I needed it to come to my office so I can surprise him when I get home, it's no fun if I don't get to see the look of excitement on his face when he gets it.

A bit ago his power supply died, I told him it was the PSU but he said it wasn't. I was right, but that is neither here nor there. So I figured he would probably need a new PSU if he wants to use his main computer. Lately he has been playing a low graphics game on his laptop, so it's not like he doesn't have a computer to use. Mister Mopey would be very happy and pleased if his computer was up and running again. I hopped online to Newegg and ordered this 750w PSU (crappy pic, sorry): 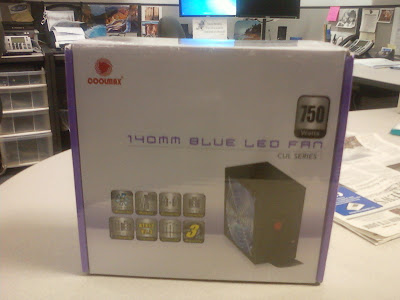 I prepared for Valentine's Day but I failed to prepare for the gift!!! Yet again I had to rig up some wrapping paper at work like I did one Christmas. The sad part is unlike Christmas I don't have any glossy PC Mags to use for his wrap job. All I have is today's newspaper and some not so pretty pieces of origami paper. So I decided to take the funny's and the Valentine's Day shout outs and tape the two pages together. I wrapped the PSU in the newspaper (my hands are now black!) and decided the box was too plain. I need a bow or something, I had 3 sheets of shit brown origami paper and orange. I did the best I could to rig up a little bow type device for the present. It all looked fine except the bow's center was showing this glob of tape I used to assemble the bow. I went out back to the cage to look for a broken computer part to use. I thought a power button would be a cute idea since it's a hint to what is in the box, but alas I settled on a CR2025 3v battery. I think it looks awesome: 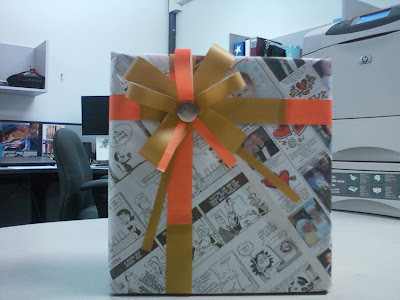 It's not the best wrap job and I made do with what I had but it's the thought that counts right? It's what's inside that really matters since most wrapping paper gets tossed moments after the present is unwrapped (unless you are those freakish paper wrap hoarders). I think maybe since I put so much effort into the wrapping and I saved the planet by reusing today's paper, I am winning at the present game. In the future I should just have some wrapping supplies at the office since I can't be sneaky and wrap his presents at home.

What did you do for Valentine's day?

My grandma slapped the shit eating grin off my face. 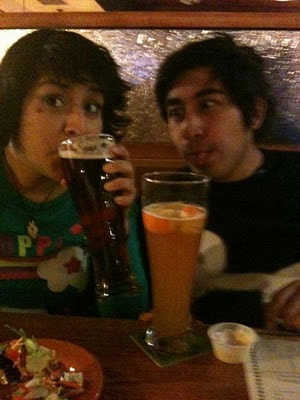 Once upon a time I said some shit I could never take back and boy was I sorry I ever said it. Check out the blurry picture to the right. See those two silly people? That's me and my youngest brother Ricky. You would never know it now but when he was just a little tyke I had it out for him and I was out for blood. Now not only do we look the most alike out of all our siblings but we pretty much have the same likes and personality.

You see my youngest brother is technically my half brother. No one knows who the dad is and I think aside from my brother feeling blue about it, no one really cares. He had our uncles as great father figures in his life. I don't call him my half brother he is my brother, there is no half. I can't pick what half is my brother so all of him is my brother. I love him dearly.

As an adult I know I have learned three life truths that came about because of my brother.

Clicky click to read on »
Posted by Unknown at 2:42 PM No comments:

Email ThisBlogThis!Share to TwitterShare to FacebookShare to Pinterest
Labels: me, the bad, things you can't undo, why

I am mentally and physically exhausted!

I just realized that it is not Wednesday, it is Thursday. I have one more day to go for my work week to be over and Monday is, thankfully, a holiday! I hate that I am so exhausted that I don't even know what day of the week it is.

I have been practicing German in an effort make my back packing trip through Germany a bit easier. (I also hate it when people assume I don't know a language and talk shit. So I WILL know.) I am hoping to get together with my sister to do some flash card and conversation practice. I almost want to put it off because today, I have a fucking head ache. Not that this has anything to do with how my head will feel on Friday night, I think some mental rest is needed. Maybe a nice long drive will help clear my thoughts or maybe a walk on the beach will help.

Clicky click to read on »
Posted by Unknown at 9:41 AM No comments:

Month #1 at the gym; complete.

So since joining the gym at the end of December until now I have accomplished the following things:

Clicky click to read on »
Posted by Unknown at 11:53 AM No comments:

Email ThisBlogThis!Share to TwitterShare to FacebookShare to Pinterest
Labels: gym, the bad, the good

There are good parents and then there are breeders.... 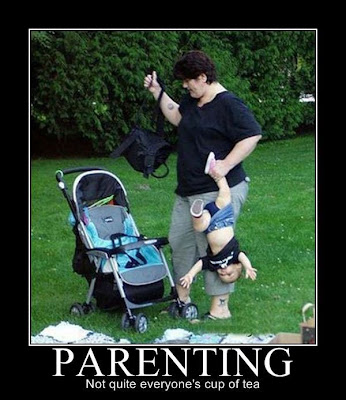 Seriously, some people do not deserve to have children. Just because you can procreate does not mean you should be allowed to. Example: you have to have a license to operate a motor vehicle. If not you get in deep doodie if you get caught driving without a license. Not to mention people need to learn the rules of the road so we don't have destruction derby cruisin' down Broadway.