The wheels on the bus go round and round.

You all know I went to Germany.  Some of you may even know that to get to the airport, my sister and I decided to take the Greyhound bus.  To make a long story short, my mom said the family was busy that night so not to bother asking anyone.  They would all say no, later we found out that my brother offered to drive us to the airport.  Whatever, we were determined to get to the airport so we took a bus.  The adventure began the moment the bus arrived at the station and would continue on through the night.
Clicky click to read on »
Posted by Unknown at 11:04 AM No comments: 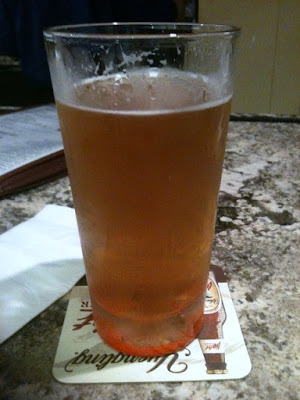 I love food and good beer. What better place to indulge in both than Germany. I tried to snap shots of everything my sister and I consumed. Sometimes we forgot to take pictures because we were ravenous and towards the end of our trip flat out lazy. So pictured above is my last beer (Sweetwater 420) that I had stateside in the Atlanta Airport. The beer was okay but I was about to embark on a journey to taste bud heaven in Germany.

Clicky click to read on »
Posted by Unknown at 11:55 AM No comments: 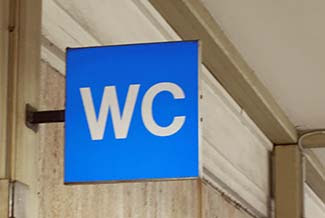 In preparation for my trip to Germany I read about important things like using the bathroom. Hold on, before you start thinking, "Damn this girl is going to another country and isn't even potty trained?!" No, no. I read that bathrooms are marked WC (for water closet) in Germany. Kind of important to know how bathrooms are labeled especially when one is going to be in Germany for several days. I really can't hold it THAT long. So, armed with the knowledge that a lavatory is labeled WC I did well at first. I had no problem locating bathrooms (another thing I read was that you had to pay to use most public lavatories) or carrying the correct amount of money to use the loo.

I don't know if this has happened to your or not but I know it's not just me. Have you ever had to pee so bad that you couldn't think straight? The only thing in your mind is the prospect of finding a lavatory and feeling that joy of finally being able to relieve yourself (NOT in your pants). You start having mad thoughts of popping into an alley or behind a bush just to feel the sweet relief you much desire. Then, you find a bathroom, you suddenly let the flood gates loose. When you are finished you feel like you are on top of the world. That frantic feeling, being unable to think straight, it's all gone! Suddenly you feel like you are thinking with the utmost clarity and you can take on anything. Well I had to go pee pretty bad while in Munich, REALLY bad.

Clicky click to read on »
Posted by Unknown at 8:00 AM No comments:

Being a reader of many foreign blogs I am aware of dual flush toilets. I think it's a fine idea and a great way to conserve water. You use the big button for poops and the little button for pee.

Many places in Germany had dual flush toilets. Not all of the buttons looked like the one on the right but they were comparable.

I noticed that many places required several flushes due to the water pressure I assume. Or dual flush toilets are just constructed very poorly. Even if my business was only number 1, the toilet paper would just not flush! So I started just using the big flush, still not very good. Not very efficient in saving water if you ask me.

So by the time we got to Wiesbaden to visit April, Chase and Tucker I decided to voice my findings after using their bathroom. I had gone number 2 ****Warning!!! TMI: My poop wasn't a huge log or anything like that. It was actually a small very soft #2. My body was still trying to adjust to the food and drinking I was doing in Germany. Soft stool, now you know.****

I came out of the bathroom after 5 big flushes and said, "Dude your toilets here suck! I just made the tiniest turd and had to flush 5 times!!! I could only imagine if I had shit a log how I would have managed to get it down." 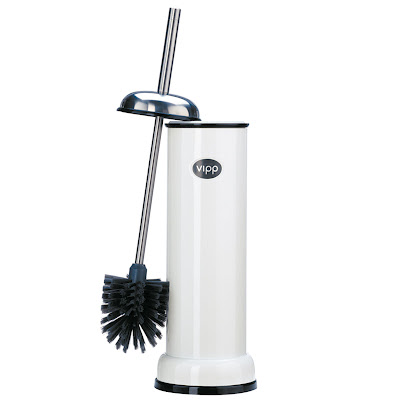 Chase then goes on to explain that he uses the toilet scrubber to break up his poop so it will flush down! Nasty! I suppose you gotta do what you gotta do. To me the scrubber is for cleaning the toilet not busting up giant turds!

From that point on I started noticing that most bathrooms in Germany have what I now affectionately refer to as "The Poop Stick". Obviously Germans know about their water pressure issue and are awesome enough to provide poop sticks. It would be shitty (har har) to use a bathroom and flush in a vain effort to break up the poop. Or even worse just leave the dookie for the next unsuspecting victim.

While discussing bathrooms, I noticed a few places where the toilets had no seats. Just a bowl! And many places didn't have ass gaskets either. While in Germany I did a lot of hover peeing/pooping. Hover peeing is easy peasy. Hover pooping; takes some skill. I would say I will pack my own ass gaskets for future trips but why waste money and packing space. I did remember to pack tissue because toilet paper running out is a world wide problem. Sucks when you run in to pee and then realize: SHIT no toilet paper!

Posted by Unknown at 3:11 PM No comments:

While on my adventures in Europe, I noticed that the street art in Germany and The Netherlands is really neat. I saw so many places with huge murals that were not tagged over. The murals were really funky and cool so I think it was a deterrent to people who would normally tag up a fresh, clean wall.

I decided to take pictures of some of the murals and graffiti that caught my eye. I really wished I could have caught some of the amazing work along the rail lines but alas the train went too fast. I noticed Futurama is a big thing on the train route between Wiesbaden and Cologne.


This is about what my sad little town has to offer in terms of graffiti (urban art, if you must call it that). I wouldn't mind seeing graffiti in my town if it was actually good. I would think some large scale murals may give my dreary Santa Maria the perk it needs too. I am probably in the minority who thinks that. :(

Clicky click to read on »
Posted by Unknown at 12:36 PM No comments:

Giving A Guy A Break

When it comes to law enforcement and giving someone a break I am quite skeptical. Maybe it's where I grew up?

I saw a drunk guy get a break. Seriously got a small talking to and then was allowed to stumble off.  (Keep reading the story gets better.  Or worse?)

I have never seen shit like this in my whole life.

Until I went to Germany! 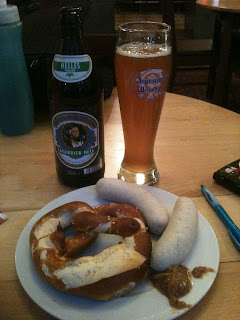 I am sitting at a table alone enjoying a Bavarian breakfast which consists of Wiesswurst, pretzel, sweet mustard and beer. I hear drunken shouting. After closing down the bar at the hostel I was staying at, I am not amazed that while having my breakfast at 0630 I hear some guy shouting in the street.  I figured the shouting would end or I would hear sirens.

But the shouting did not stop, it kept going and getting louder. The curious cat in me came out, so I stepped outside to see what was going on. I see this guy rolling around in the gutter on the street, after a night of full on rain you know the guy is soaked. Idiot! A guy from Wombat wearing a security shirt is trying to help the guy up and clearing the guy's belongings out of the gutter and another man is trying to help Mr. Drunky McDrunk. How does McDrunky repay them for their kindness?

Clicky click to read on »
Posted by Unknown at 3:53 PM No comments:

Today is the day!

I am ready to go with a monster of a head/face ache and I am exhausted. Great way to start a trip, yes? Oh yeah! -_- zzzzzzzz

Clicky click to read on »
Posted by Unknown at 12:03 PM No comments: